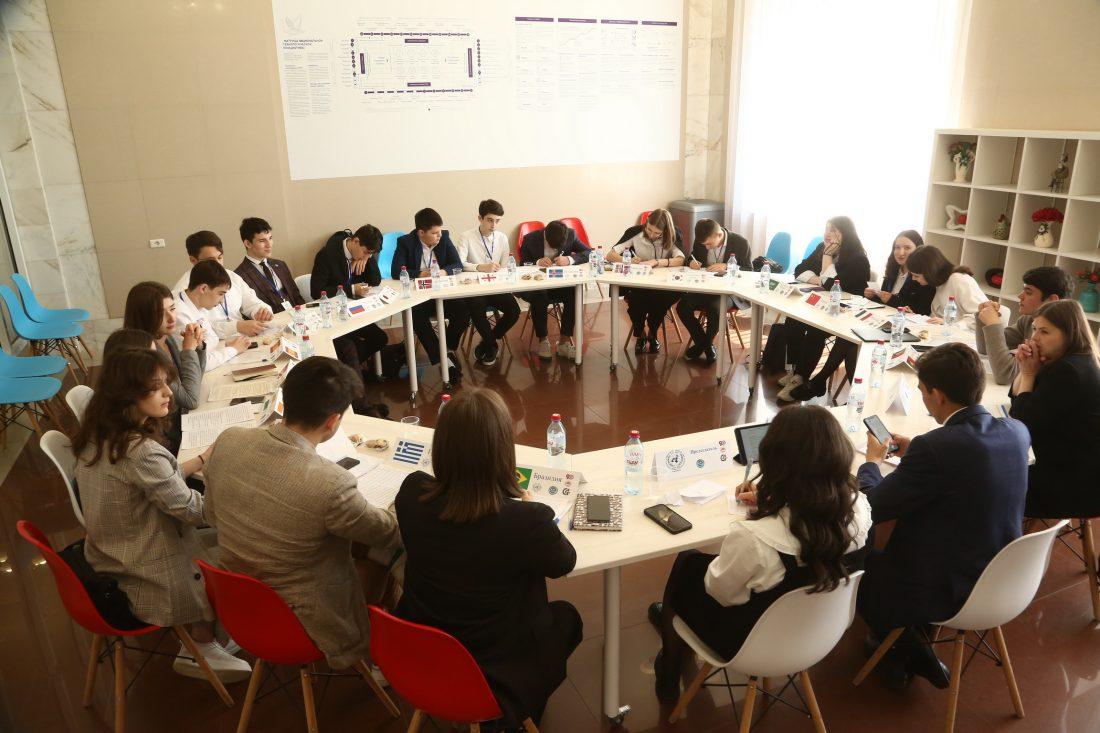 78 young diplomats from among the schoolchildren of the republic and students of the Kabardino-Balkarian State University named after H. M. Berbekov and Kabardino-Balkarian State Agrarian University named after V. M. Kokov gathered on May 13 at the site of the KBSU to discuss the important agenda of the III North Caucasus Model UN «Hotbed of Peace». Supporting tourism as part of the recovery of the global economy and providing inclusive and equitable quality education and promoting lifelong learning opportunities for all are the main issues put at the forefront of the business game — 2022. The North Caucasus Model UN is a joint project of the resource center to form skills of public (public) diplomacy MKOU «Gymnasium No. 4» g.o. Nalchik and Kabardino-Balkarian State University named after Kh. M. Berbekov. On behalf of the leadership of the KBSU, greetings were addressed to the delegates of the Model UN by the acting. Murat Gukepshokov, Vice-Rector of KBSU for Personnel and Organizational and Legal Affairs:

«This year KBSU celebrates its 90th anniversary of its founding. We want you to realize all your ideas within the framework of this project within the walls of our university. The world today is very difficult. And this is understandable. Many problems have accumulated over the centuries. Among them are those that you will discuss today. You young people should be good. Your project is called «Center of Peace». I hope that with your enthusiasm, with your love for life, you will do everything so that this Hearth of Peace always burns».

Vice-rector for additional education and external relations of KBGAU Svetlana Azikova noted that the friendship of peoples is, first of all, friendship between people, which no politicians can destroy. The director of the MKOU «Gymnasium No. 4» r.o. told about the goals of the North Caucasian Model UN project. Nalchik Rimma Nagoeva:

«This project was born in 2018, and today time has shown that the name “Hotbed of Peace” is very relevant. This is a business game, a youth platform where future diplomats try themselves in the role of delegates from UN member states and work out the skills of public diplomacy: do not stray, do not go over to a personal opinion, because it is about the interests of the country, learn to develop important points of a resolution, etc. .d. In the game, we learn to understand that those who remember the past can appreciate the world. When you forget the past, it comes back. Speaking, losing, modeling the work of real committees of collective security bodies, we are moving in small steps towards the formation of a new world in which there is no place for war, in which not only diplomats, but also ordinary citizens, especially young people, are able to maintain a dialogue, respect differences of opinion and interests. That’s what this game is for. And most importantly, the North Caucasian Model UN is designed to form a positive image of Kabardino-Balkaria and the North Caucasus as a whole».

Opening the Hearth of Peace 2022, Zurab Afaunov, Secretary General of the III Model UN, a student of the Nalchik gymnasium No. 4, instructing the participants, said:

«A person who, despite his fear, goes forward, always deserves respect. Don’t be afraid to make mistakes, say «no» to your fears. Do not give up and go towards your goal, defending the interests of the countries whose representatives you are, imagine that their future and the future of the entire planet depend on you».

Model UN-2022 began with a master class by the Director of the Social and Humanitarian Institute of the KBSU, Muslim Tamazov, “Oratory and Logic”. The future peacekeepers learned how a speaker’s speech should be structured, what «tricks» should be used to attract the attention of the public. Significant pauses, and the first phrase, and a bright beginning, and smooth speech, the use of quotations in speech, witty jokes out of place, etc. work for a positive image of the tribune. A good speech, according to Muslim Tamazov, should contain answers to the questions: why am I talking? What I’m talking about? What am I saying, where and to whom?

«What is political analysis for?» — this was the name of the master class of the head of the Youth Department of the Russian Society of Political Scientists in the KBR, Inal Bekboev, who explained to the audience how to recognize true and fake information and why disinformation is dangerous.

After the educational block, meetings of the committees of UNESCO and the WTO (United Nations World Tourism Organization) began in Russian and English.

UNESCO has dealt with the issue of providing inclusive and equitable quality education for all mankind. Because Education is a tool that empowers people so that they can participate fully in society.

On the agenda of the World Tourism Organization is the issue of supporting tourism as part of the recovery of the global economy. Travel and tourism is the largest industry when analyzing various economic indicators. Tourism is the most dynamic industry of modern society, and its development is one of the priorities of the world’s economies. After the spread of the pandemic, states gradually began to close their borders, and by April 2020, most countries of the world either completely restricted entry and exit into their territory, or imposed severe entry restrictions, including mandatory quarantine upon arrival, which led to a virtual restriction of freedom of movement enshrined in the Universal Declaration of Human Rights. The delegates of this committee expressed their support for the «renaissance» of tourism around the world. Within the framework of the first day of the III Model UN, the «Briefing of Diplomats» was held — a scientific and practical competition, the purpose of which is to recreate the work of press secretaries of Russian diplomatic missions in real conditions. The task of the contestants is to answer the questions on the agenda “Support for tourism” and “The right to quality education”.

Experts adviser to the administration of the KBSU for career guidance Aksana Karasheva, correspondent of the newspaper “Nalchik” Marina Bitokova, teacher of Russian language and literature MKOU “Gymnasium No. 4” Yulia Bekuzarova , Zuliya Gedgafova, Deputy Director for NMR and ICT of MKOU «Gymnasium No. 4», evaluated the content of the speech, the use of oratorical and rhetorical techniques, the metaphorical nature of speech, and the reinforcement of speech with quotes from famous diplomats.

On May 14, on the second day of work of the III Model UN, which was held at the MKOU «Gymnasium No. 4», o. Nalchik, teachers of KBSU Murat Khokonov, Candidate of Philosophical Sciences, Associate Professor of the SGI, and Alena Anishchenko, Head of the Service and Tourism Lab of the SGI, held master classes for modelers «Cultural education as the basis for the formation of a humanistic worldview of the younger generation» and «Literary and gastronomic tourism as an engine of the economy of impressions.»

Then the participants continued to work in groups, honing resolutions on the main issues on the agenda.

And after the solemn closing ceremony of the III Model UN «Hotbed of Peace», young diplomats took part in the Caucasmun 2022 ball.