Main > News > Putin awarded KBSU for help during the pandemic

Putin awarded KBSU for help during the pandemic 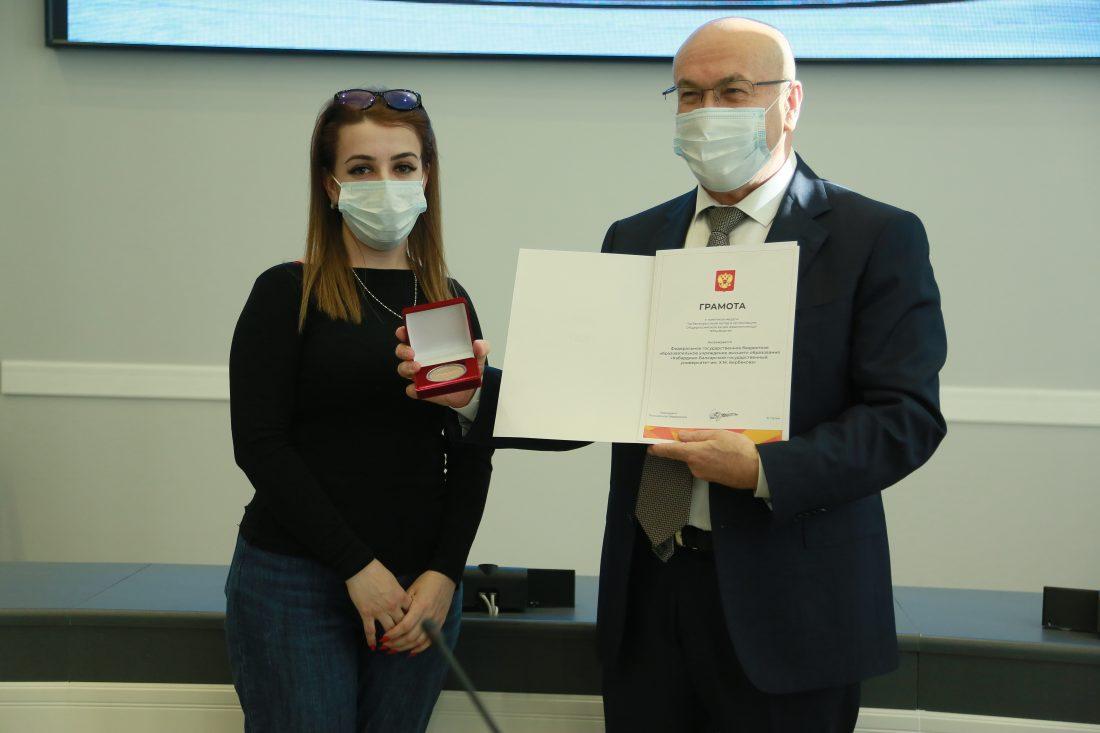 On February 10, the Commemorative Medal of the President of the Russian Federation Vladimir Putin «For disinterested contribution to the organization of the All-Russian Mutual Aid Action #My’Vmeste» was awarded to the Kabardino-Balkarian State University named after H.M. Berbekov, the award was presented to the Acting Rector of KBSU Yuri Altudov.

The awards ceremony was held by the head of the Regional Volunteer Headquarters for Assisting the Elderly during the Spread of Coronavirus Infection in the Kabardino-Balkarian Republic, a 4th year student at the Institute of Chemistry and Biology of KBSU Zalina Kushkhova. Presenting the medal, she thanked the administration of the university and the staff of the medical college of KBSU for the all-round support provided to the volunteers during the pandemic.

«The members of the regional operational headquarters were provided with hot meals for two months. Teachers, staff and students of the university delivered food packages to people over 65 years old on their own vehicles. All the guys worked almost tirelessly, there was also such that we spent the night at work. And there was always a feeling that we are really fighting a common misfortune together», — Zalina Kushkhova noted.

Yuri Altudov, in turn, noted that it is a very rare case when a student presents a high state award to his rector.

«I am glad that in such a difficult period our university has become useful to society not only by education and science, but also by selfless good deeds coming from the heart. More than half of 140 volunteers who participated in mutual assistance campaigns are students of KBSU. And this is true — we are together», — summed up the head Yuri Altudov.

The same commemorative medals were awarded to the director of the KBSU medical college Svetlana Pshibieva and the college teacher Irina Kumekhova, who personally supervised the interaction of medical volunteers through regional social services, medical organizations, sponsors, which contributed to the fruitful work of the volunteer headquarters.

Letters of thanks from the Federal Agency for Youth Affairs were received by the acting Vice-rector for BP and SV Sultan Gekkiev, head of the dormitory №7 of KBSU Zaur Ataev, administration of the Medical College of KBSU and the state university. At the end of the meeting, Sultan Gekkiev suggested encouraging volunteer students to travel to the Elbrus region.

Recall that during the first wave of the pandemic from March 21 to July 15, 2020, the All-Russian public movement «Volunteers-doctors», the Association of Volunteer Centers, together with the All-Russian Popular Front, launched the All-Russian action of mutual assistance #My’Vmeste, within which volunteer headquarters were deployed throughout the country helping people in the situation of the spread of coronavirus infection. The Kabardino-Balkarian State University named after H. M. Berbekov, and in particular the medical college of KBSU. More than 100 volunteers of the Regional Volunteer Headquarters for helping the elderly during the spread of coronavirus infection in the KBR are KBSU students who worked every day for 3 months. At the end of the first wave, 81 volunteers of KBSU were awarded commemorative medals of the President of the Russian Federation Putin for their disinterested contribution to the organization of the All-Russian Mutual Aid Action #My’Vmeste.