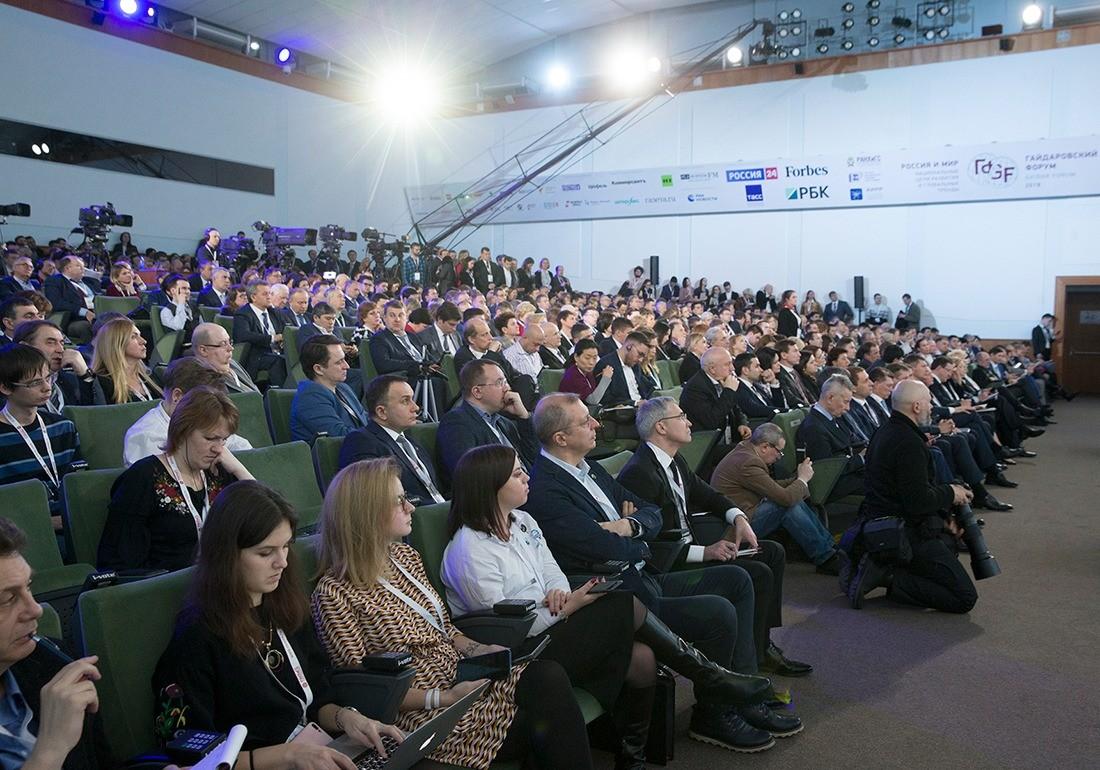 Rector of Kabardino-Balkarian State University named after H.M. Berbekov Yuri Altudov and vice-rector of the university for research Svetlana Khashirova took part in the annual international scientific-practical conference «Gaidar Forum» — a significant political and economic event in Russia with the participation of influential experts from around the world. Forum topic: «Russia and the World: Challenges of the New Decade.»

The forum brings together theorists and practitioners, leading world scientists and politicians, representatives of financial circles and the global business elite. The Gaidar Forum was recognized as the business event of the year and received the 2013 The Moscow Times Awards. The forum is one of the three most quoted economic conferences in Russia. The Financial Times has included the Forum in five global business events of the day.

The forum has been held since 2010, its discussions are traditionally focused on the most pressing problems of our time. Particular importance is attached to topics related to understanding the situation and the strategic role of Russia in the world. A total of 85 discussion platforms were organized — panel and expert discussions, open dialogs, presentations and meetings. Special events of the Gaidar Forum included the annual meeting of the Russian branch of SDSN member organizations “Prospects for the development of SDSN in Russia”, an open meeting of the public council of the basic organization of the CIS countries on training in public administration, an open meeting of the NASDOBR Presidium “Results of 2019 and new frontiers public-private partnership in assessing the quality of business and management education. ”

KSU Rector Yuri Altudov took part in the panel discussion “Innovations in Russia: Planning the Future”, on the agenda of which were synchronization mechanisms for supporting technology companies at the regional and federal levels, the possibility of forming inter-regional mechanisms for supporting technology initiatives, the role of large business in regional technology policy and the place of research centers in the implementation of Russia’s innovation strategy.

Participants in the discussion, including Minister of Science and Higher Education Mikhail Kotyukov, Deputy Minister of Economic Development Oksana Tarasenko, President of the Russian Academy of Sciences Alexander Sergeyev and Kaluga Region Governor Anatoly Artamonov, Chairman of the Management Board of RUSNANO Management Company Anatoly Chubais formulated a sequence of steps that you need to take to eliminate the backlog of Russia in the global innovation market. This included, among other things, the interaction of the center and the regions for the development of an innovative economy, and the strengthening of coordination between development institutions and the optimization of innovative infrastructure.

Vice-rector of KBSU for research Svetlana Khashirova took part in the expert discussion “Sciencemetry 2.0: digital reboot”, which discussed a wide range of problematic issues of modern domestic science, namely the introduction of digital technologies in higher education and science, the pros and cons of applied scientometrics as a management and communication tool in science, the transition from the “race for citation” to the leap in innovative production, artificial intelligence and blockchain technology in the assessment of science Noah activity, the future of university research platforms.

Tomorrow, January 16, the forum will host about three dozen events in business and scientific and expert programs, among which the panel discussions are the most interesting for the university: “The Digital Revolution in Education and New Learning Technologies”, “Russian Education in the Context of International Indicators” , “National technological policy and regional specifics”, “Development of education export”, “International cooperation: the emergence of new professions and new skills and competencies for future markets”, “Brain vs lawsuit intellectual intelligence ”,“ Technological challenges to the labor market ”.

The Gaidar Forum is held under the auspices of the Government of the Russian Federation and over 11 years has become one of the most respected expert sites in the country. The forum has registered more than 14,700 participants, including 600 speakers from more than 30 countries.

The organizers of the XI Gaidar Forum are the Russian Presidential Academy of National Economy and Public Administration, the Institute of Economic Policy named after E.T. Gaidara and the Association of Innovative Regions of Russia.