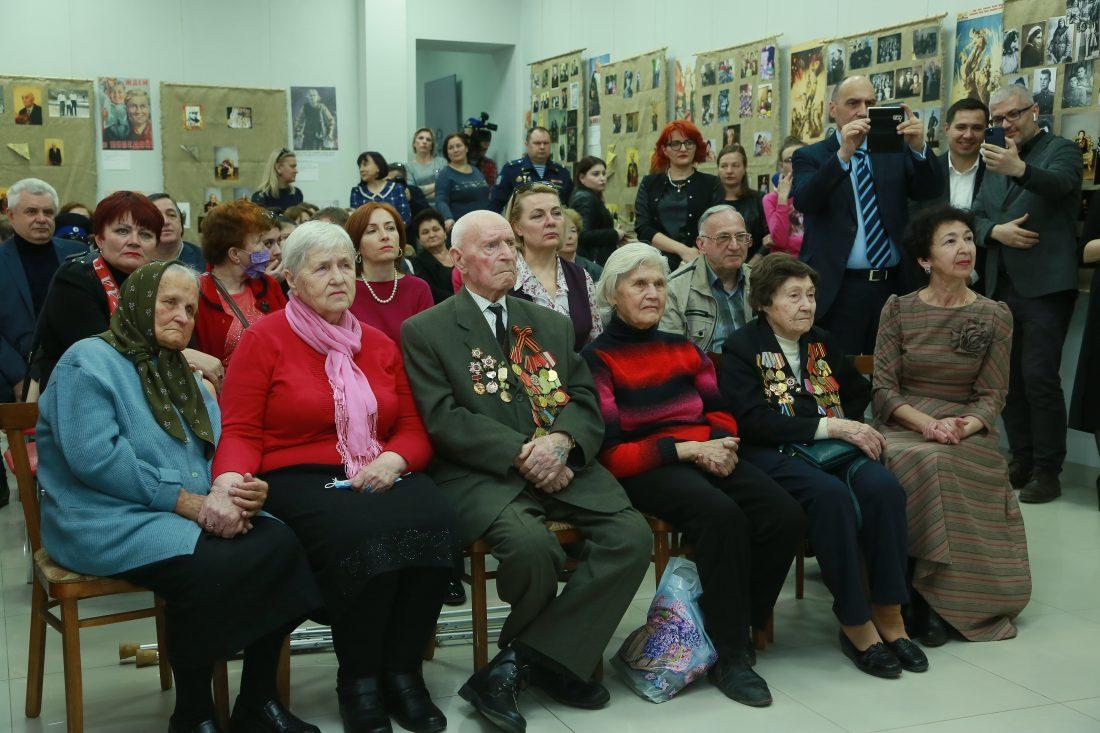 Employees of the Kabardino-Balkarian State University named after H.M. Berbekov took part in the social project «Family Album», implemented with the support of the Presidential Grants Fund by the Family Club «Umka». Within the framework of the project from 5 to 18 April at the Kabardino-Balkarian Museum of Fine Arts named after A.L. Tkachenko hosted a photo exhibition dedicated to front-line soldiers — veterans of the Great Patriotic War.

The project is being implemented by KBROO «Family Club» Umka «with the assistance of the Ministry of Culture of the KBR, the Nalchik City Council of Veterans, the Kabardino-Balkarian Museum of Fine Arts named after A.L. Tkachenko. The exhibition featured family photographs of veterans, artifacts of the Great Patriotic War, provided by the KBROO “Nalchik search detachment named after 115th Cavalry Division «, rare personal belongings of soldiers and officers of the Red Army, made on the front line and restored by search engines.

The social project «Family Album» is aimed at preserving the memory of the Great Patriotic War and strengthening ties between generations, therefore, for the organizers — the Umka family club and their main assistants — the Nalchik City Council of Veterans, it was very important not only to gather all family members for photography , but also to attract volunteers to the project — young people of school and student age.

“First of all, with our project, we want to pay attention to the veterans of the Great Patriotic War. There are only 38 of them left in Nalchik. Our organization held professional photo sessions for 10 veterans and their families who agreed to this at such a difficult time, ”said Olga Krasilnikova, project manager, chairman of the Umka Family Club. — In our opinion, it is very important to preserve high-quality photographs with children, grandchildren and great-grandchildren. The results of the photo sessions were saved on disks and made into a beautiful printed photo album — «Family Album», where, in addition to newly created photographs, we posted digitized old photographs of youth, letters from the front, awards and other touching relics. This photo album will become a gift and, undoubtedly, a very important family document that preserves history for present and future generations. »
The opening ceremony of the exhibition was attended by three veterans-participants of the project — Nina Gerasimenko, Elena Kulbashnaya, Ivan Bulgakov, a concert was arranged for them with the participation of students from the Children’s Art School No.1 Nalchik and the «Callisto» dance tetra.

It was the participation of the veterans themselves that made the exhibition a significant cultural event of the city, noted the chairman of the Committee of the Parliament of the Kabardino-Balkarian Republic on education, science and youth affairs Nina Emuzova.

“Yes, probably every Russian family has an album containing photographs of our elders, our winners, important for the heart and soul. These few black-and-white photographs are a reminder of those historical events that took place more than 70 years ago, of the titanic work that our elders applied both on the battle fronts and in the rear on the labor front. And each such photo is the property of the family. And I would very much like such photographs not only to be kept in families, but also to be shown to young people, so that the younger generation does not forget what happened to the country, how hard the Victory was achieved. So that they understand how to protect the world, ”said Nina Emzova.
Organizational support to the Umka Family Club was provided by the Nalchik city public organization of war veterans, labor (pensioners), the armed forces and law enforcement agencies. The chairman of the Council of Veterans, Mustafa Abdulaev, for objective reasons could not visit the exhibition, but left a video message to its organizers and participants:

“The Great Patriotic War is one of the most terrible tests of our people. There is no family that she would not touch. War generations are leaving us farther and farther away. We live in the new millennium, in a different country with a different ideology. But there is something that should always be present in our life. This is a memory. Memory is what a person can carry through the years, it is the historical memory of a great and tragic event for all our people and the historical memory of a particular family. Nobody is forgotten and nothing is forgotten! I am very grateful to the Umka family club for winning a presidential grant in order to capture our veterans, show them attention, in order to tell young people about their exploits. And even more, I thank our dear, beloved veterans who agreed to take part in this project.
Thank you, my dears! I wish everyone the strongest health and I hope to see everyone at the celebration of the Great Victory Day! ”- Mustafa Abdulaev noted in his address.
“I have seen so many deaths, loaded so many planes for combat raids, that God forbid such a burden to anyone. The most important thing is peace on Earth. Whatever it is — take care of the world. Live in happiness, respect each other, take care of all the best that you have, take care of your relatives. Thank you for this exhibition, thank you for this meeting, which stirred up a lot of pleasant feelings, ”veteran Nina Gerasimenko said after the concert.

A few days later, a personal tour of the exhibition was held for Vladimir Borisevich.

And on April 18, during the solemn closing of the exhibition, all active participants of the «Family Album» project were awarded with certificates and diplomas, volunteer artists and photographers received letters of thanks from the Family Club «Umka».