KBSU celebrated the 76th anniversary of the Great Victory 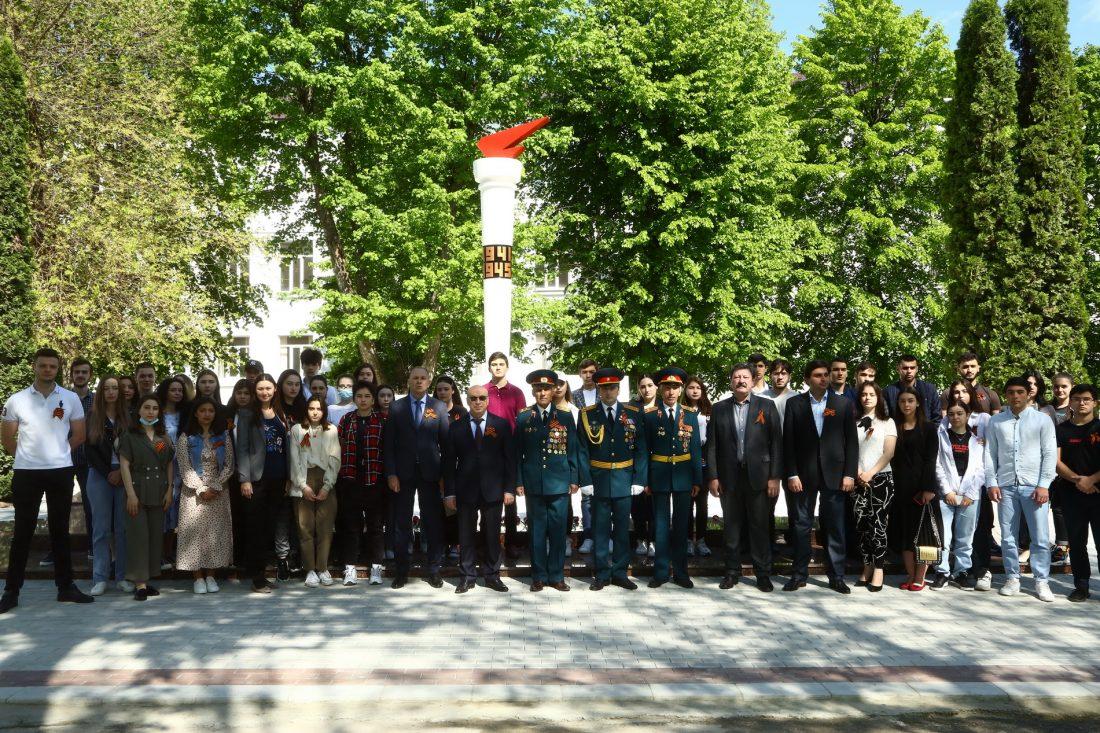 May 9, on the day of the 76th anniversary of the Victory of the Soviet people in the Great Patriotic War, at the Kabardino-Balkarian State University named after H. M. Berbekov honored the memory of those who at the front and in the rear, sparing no effort, forged the Great Victory. At 9 o’clock in the university square, flowers were laid at the reconstructed monument erected in honor of the staff, teachers and students of the university who laid down their heads in the fight against Nazi Germany.

The ceremony was attended by Acting Rector of KBSU Yuri Altudov, Chairman of the Council of Veterans of KBSU Khasan Shurdumov, faculty of the university and students.

“Today, on the anniversary of the Victory, all over the country people gather at the monuments to the fallen heroes, lay flowers, remember the exploits of the heroes of the Great Patriotic War. KBSU, the former Kabardino-Balkarian State Pedagogical Institute, held a rally on June 23, 1941, on the second day of the outbreak of the war, where it was decided to support the Red Army in every possible way and do everything to protect our Motherland. On the second day, many teachers and students of the university went to the front. And then again and again. Unfortunately, we do not have data on the exact number of students and teachers of our university who went to the front, but we know for sure the names of 144 of them who did not return from the battlefields, they are carved on memorial plates.
Employees and students of the Kabardino-Balkarian Pedagogical Institute on the fronts of the Great Patriotic War have established themselves as brave warriors, many of them were awarded orders and medals. A graduate of the Pedagogical Institute Grant Oganyants, company commander of the 71st Tank Regiment of the 11th Guards Cavalry Division of the 5th Don Guards Cavalry Corps of the 2nd Ukrainian Front, received the high title of Hero of the Soviet Union.

Those who returned from the war after its victorious end, the front-line soldiers, led by the secretary of the party organization Vitaly Lesev, took the initiative to erect a monument to the fallen employees, teachers and students of KBSU, and with the full support of Rector Vladimir Tlostanov in honor of the 30th anniversary of Victory in the Great Patriotic War , in 1975 this monument was opened, which is a sacred place for KBSU. Every year we come here to pay tribute to our fallen heroes, ”retired colonel Khasan Shurdumov addressed the audience with a solemn word.

The Chairman of the Council of Veterans of KBSU also noted that thanks to the leadership of the university, the builders of the monument this year acquired a more beautiful aesthetic appearance. Indeed, in the course of preparations for the anniversary of the Great Victory, the monument itself and the area around it were transformed. Along the entire perimeter, paving slabs were replaced, evening lighting and new marble slabs in the form of open books with the names of the deceased teachers and students inscribed in the history of the university in gold letters were installed. The pedestal is also decorated with marble. The monument itself in the form of a lighted torch shines with whiteness, and the words, carved in gold, «We will be worthy of the memory of the fallen,» addressed to descendants, are remembered as an oath forever.